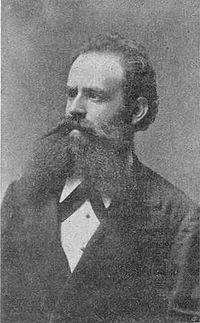 Born in October of 1848 in Vienna, Guido Karl Anton List was the son of a prosperous middle-class family who traded and worked in the Leather goods industry. Raised a Roman Catholic, List found his love of mythology and history early in life, often acknowledging that his belief in the Germanic Gods, and Wotan in particular, developed during these young years. A scholar, painter, and writer, his big ambition was to live his life doing the things he loved. His father, however, pressured him strongly into taking over the family business.

In his spare time, he continued to write and paint. He also took part in several leisure sports clubs, such as rowing and mountaineering. During one of his many trips List purportedly left his group to spend a solitary midsummer atop Geiselberg hillfort. Here, it is said, he reaffirmed his belief in Wotan. Upon the death of his father in 1877 List abandoned his family business in favor of pursuing his writing passion.

Despite being an avid believer of Wotan, he married his second wife in a Protestant ceremony in 1899. This didn’t hamper his writing or his influence, however, and by 1902 when his writings took on a different direction, he was a prolific and well-known voice in the nationalist and volkish movements.

It was in 1902 that von List had his great epiphany. After a cataract surgery left him blind for eleven months, List was left with much time for reflection and meditation. During this time he discovered the Armanen runes. He called this set of runes the Proto-language of the Aryan race. It was through these runes that von Lists occult ideas and writings evolved.

The popularity of his ideas exploded amongst the wealthy, middle class of Austria and Germany at the time and the Guido-von-Gesellschaft was born. The von-List society further evolved and on the Midsummer of 1911, the inner group called the High Armanist Order was created. While the main group focused on his occult and political ideologies, the inner group was dedicated to the worship of Wotan through his writings and sacred pilgrimages.

With food shortages after the war and old-age creeping up on him, von List’s health deteriorated and in May of 1919 he passed away at the age of 71. His body was cremated and buried in an urn in the Vienna central cemetery, Zentralfriedhof.

Among his many novels, plays, and political manuscripts it was his first dedicated occult manuscript, “Das Geheimnis der Runen” or “The Secret of the Runes,” that really sets Guido von List up as a forefather of modern Asatru, influencing many including the Asatru Folk Assembly’s hero Alexander Rud Mills.

What can we learn from this story?

We can never anticipate when the spark of inspiration will lead to the flame of an idea. It’s easy to look at that inspiration and say that it isn’t real, or it’s just the imagination going crazy. With faith, however, our limitations can be cast off. Have faith in our Gods. Have faith in our Ancestors and in our Folk soul. Most importantly, have faith in yourself. each one of us can accomplish great things if we work hard enough and maintain our faith.