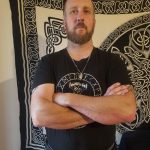 Please welcome Trevor Sydorenko of Manitoba as our newest apprentice Folkbuilder for the Baldrshof District! We are overjoyed to have a Folkbuilder in Canada! We are all looking forward to Trevor’s accomplishments in the coming months and years. Canada is poised to catch fire with Asatru zeal and participation! 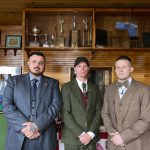 At Winter Nights in the Poconos X, 3 new Gothar were ordained as priests of the Æsir. We are very honored to have these men represent us before the Gods and we are confident the Gods are proud to have them represent the Gods to us. Please join us in congratulating Robert Stamm, Daniel Young, and Trent East as AFA Gothar. 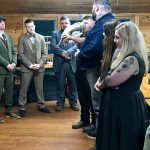 On Saturday, October 16th, at Winter Nights X, 4 apprentices took their oaths as Folkbuilders of the Asatru Folk Assembly. We would like to congratulate Heather Young, Jessica Lambert, Timothy Dumas, and Cody Raynard. We are exceedingly proud to have these outstanding ladies and gentlemen building our AFA Family!

Hail the Folkbuilders!
Hail the AFA!
Hail the Æsir! 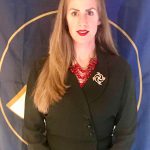 We are extremely excited to welcome Christine Dumas of Ohio as our newest Apprentice Folkbuilder for the Þórshof District. We absolutely love to see husband and wife Folkbuilding teams and this one will be amazing! Ohio is really picking up steam and we are all excited to see the great things Christine accomplishes in the coming months and years. 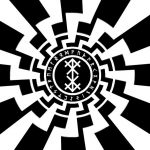 Today it is my honor to announce the Northwest Odinsfolk Kindred of Oregon as a official Kindred of the Asatru Folk Assembly. It is a beautiful thing to see our folk gathering together all over Midgard and building communities and creating families. AFA Kindreds are made up of dedicated hard working members, those who go the extra mile. The Northwest Odinsfolk Kindred has stepped up to build a community, a home, for their region. Led by Gothi Joe Rozanek, this group of highly motivated individuals is working hard to create a home for future generations of our folk.

Gaining Kindred recognition is not a easy thing, it takes dedication and loyalty and willingness to stand with the AFA at all costs.

Hail the Northwest Odinsfolk!
Hail the Kindreds of the AFA!
Hail the Asatru Folk Assembly!!! 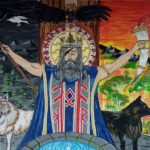 This past weekend, Witan Svan Herul traveled across the country, from Virginia to Óðinshof, and painted the breathtaking mural of the Victory Father at Óðinshof. Svan’s murals of our Gods are profound works of piety and devotion. There is truly magic in each of these pieces. When Svan completes a mural, he invites the very essence of that God into his hof and that presence is felt in a powerfully tangible way. We all owe Witan Svan a massive amount of thanks for these amazing gifts.

Please welcome Jonathan Rock of Indiana as our newest Apprentice Folkbuilder for the Þórshof District. Indiana has a good momentum and in in one of the fastest growing AFA regions in the world. We are excited to share in Jonathan’s success in the coming months and years. 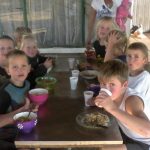 Great News, with the help of persistent Folkbuilders, we have been able to make contact with the fine folks at the South African Family Relief Project. Times are very hard for our people in South Africa, the COVID measures have made these times even harder. One thing they are particularly in need of lately is food so your donations for the 3rd quarter of 2021 went directly towards groceries for 35 hungry White South Africans. We received sincere thanks and appreciation for helping these folks, especially now.